Save Your Spot Now
Starting Soon
YES! Save My Free Seat Now

Get Traffic Without Ads

save you time and money
change your life
TODAY @ XX:XX PM
countdown
00Hours00Minutes00Seconds 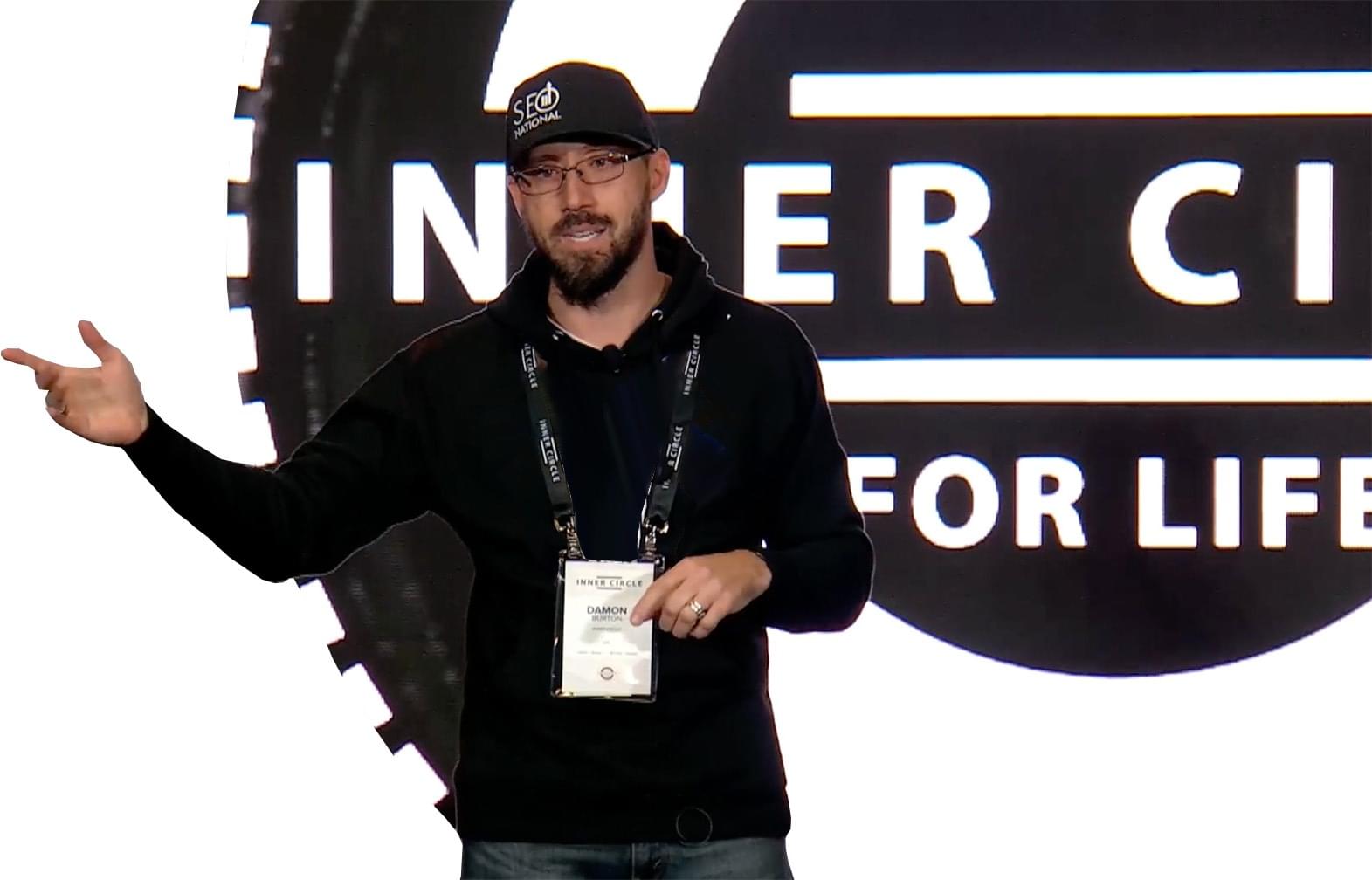 ClickFunnels - I’m a big fan of it.
So much so that I'm a member of Russell Brunson's Inner Circle.

Brunson, co-founder of ClickFunnels, has a clear vision for his product: to help users make money, easily.  ClickFunnels has these amazing features to help you create a powerful marketing sales funnel—something that would be mind-boggling to build on your own.

But while you’ll hear much about the successes people have had using ClickFunnels, there’s little talk of the false beliefs surrounding ClickFunnels optimization. These beliefs prevent users from making the most of their investment in the software. As a member of Russell’s Inner Circle mastermind and Founder of SEO National, I feel it’s my responsibility to break down those beliefs so that you don’t miss out on the awesome benefits that ClickFunnels brings to businesses.

False belief #1
I need to do paid ads to survive

Many ClickFunnels users consider paid ads to be the holy grail of lead generation. But here’s what’s interesting: less than 2% of paid ads get clicked on. In contrast, organic listings capture 94% of all clicks on Google Search. So there’s this huge gap in traffic that’s up for grabs.

Here’s the thing: when it comes to organic leads and conversions, non-paid search traffic leaves paid traffic in the dust. Below is a graphic that I made to give you an idea of organic search’s prowess:
Social = 2%
Paid Ads = 6%
Organic (FREE) Search Engine Traffic = 64% of all clicks to most websites

All traffic is not created equally 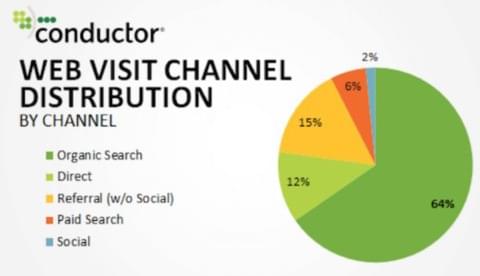 I’m not saying paid ads suck or that you should stop running Facebook ads and Google Ads for your pages. What I want to illustrate is the massive opportunity that’s available. If you’re already making millions through paid ads, just imagine exponentially increasing that through ClickFunnels SEO.
Or, you might completely switch to organic search to avoid the common pain points of paid advertising. Imagine:

You don’t have to deal with any of this when you’re working on optimizing your webpages for Google and other search engines.

Best of all, organic SEO provides more qualified, high-converting leads because it’s based on satisfying buyer intent rather than stereotyping a persona. So with organic search, you’re likely to get higher conversions since you’re reaching people based on their needs and pain points.

Have you paid for an ad lately? 🤣

SEO isn't free, but the amount you spend effectively decreases over time as your traffic from your optimized funnels increases, attracting quality leads that convert. In comparison, PPC costs keep rising no matter how hard you work to optimize your ads for web traffic and conversions.

Recently cited data from Hunch Ads shows that Google and YouTube’s CPM is up by 108%, while Facebook ad cost has increased by 89% year-over-year. This means everyone has to stretch their marketing budget as running ads has gotten more expensive in general.

Optimizing your funnels is your answer.

With the right strategy, not only could you drive NEW TRAFFIC to your funnel,
but you could also cut your cost per lead in half.

Dany is in Russell Brunson's Inner Circle with me. He let me optimize his funnel, and guess what happened next? 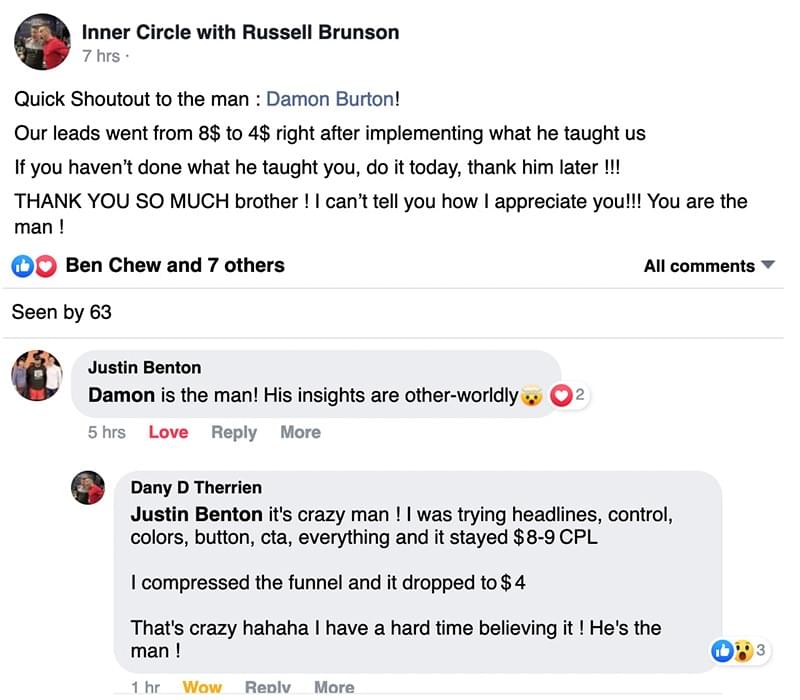 And the optimization changes took only 20 minutes to make.
RESERVE MY FREE SPOTFree masterclass starting soon

Just like funnels aren’t hard once you have the right strategy, SEO isn’t hard either.
There is a misunderstanding that search engine optimization is hard, or that Google's algorithms keep changing.

So if you think that:

... It’s a false belief that can be addressed by learning the basics with the right strategy.

Whether you’re running Facebook ads or Google ads, they’ll always be ever-changing and exhausting. SEO, meanwhile, is consistent and compounding.

The next time you hear someone grumble that SEO changes fast and often, take their verdict with a pinch of salt (or better yet, point them to the list above—they’ll realize how easier SEO is).

Well, are they?
Because from what I’ve read and eeevverrrrryonnnne I talk to, ads are getting harder and harder every day. Plenty of users report that Facebook rejected their ads for one or another reason, making their life difficult.

Check out this snapshot from Google SERP: 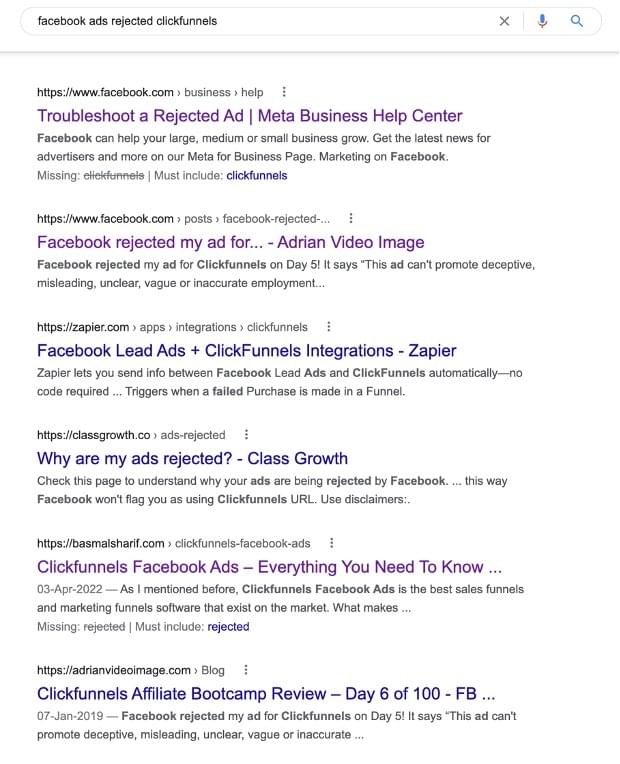 The thing is, Facebook wants the ads you create to be compliant with their advertising policy. More importantly, it wants your landing pages to be a certain type and owned by you. The social media giant doesn’t like it when you promote pages with URLs like your-product.clickfunnels.com through your ads. A workaround for this is to use your own domain, but you’d need to use a plugin to sync ClickFunnels with your domain URL.

Disclaimers are another thing ad advocates need to be mindful of. If you’re advertising a webinar, you need to disclose that you’ll give an offer at the end. A disclaimer should be there on your landing page and in the ad. Additionally, you may need to give disclaimers about results, testimonials, and income claims.

Speaking of income claims, they’re now frowned upon by both Google and Facebook. This means saying anything like you made a million dollars in x weeks is likely to get your ad rejected, even if it’s true. Sure, you can find other ways to entice the audience, but defining your success with numbers has an impact that’s hard to replicate with other strategies.

False belief #5
PPC tracking and attribution is easier than SEO

It’s actually the other way around.

PPC attribution is confusing too. With customer journeys being long and complicated, it’s difficult to know what value should be assigned to each touchpoint. For instance, if someone enters your funnel via a Google ad, reads an article, then goes to your pricing page, and after a few weeks, clicks and converts on a different post-click landing page, which touchpoint contributed the most to conversion? Yeap, it’s that complicated.

In contrast, SEO tracking is way simpler than paid ads:

So if attribution tracking is important to you, you now know which ClickFunnels growth strategy will make your life easier... Funnels SEO.

Supercharge your ClickFunnels with SEO 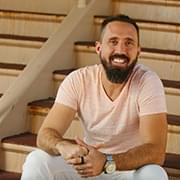 Over a decade ago, this husband and father of three beat a billion dollar company by outranking their website on Google. Since then, he knew he was onto something and went on to build an international search engine marketing company that’s worked with NBA teams, and Inc 5000 & Shark Tank featured businesses.

Having started his business right before the 2008 recession, Damon is familiar navigating and growing a business through times like today, including tripling revenue during the recent pandemic.

Since founding his company SEO National in 2007, he writes for Forbes, has been featured in publications including Entrepreneur Magazine, BuzzFeed and USA Weekly, and has helped high-profile clients make more in a month than they used to in a year.
RESERVE MY FREE SPOTFree masterclass starting soon

Copyright Funnels SEO
Funnels SEO is not affiliated or endorsed by ClickFunnels.
Privacy